Well it turns out that satisfying trips to Mangalore can be made, even without a Twister at Cherry Square. We took one such trip last evening to witness the 'Mangalore Dasara' celebrations being held at Kudroli in Mangalore. Roads upto 3 kms away from the main venue were lit up and festivity could be felt in the air.
The main celebrations were happening at the Kudroli Gokarnanatha temple. It turned out that we didnt know much about Navrathri celebrations or it's significance. All I could connect were hazy dots about Durga Matha slaying Mahishasura, 9 days of festivity, proximity to Deepavali and that was pretty much it. Oh yes, also there was this one day on Saraswati Puja when the Resnick and Hallidays and the Parkersmiths would take a jaunt out of their dusty shelves and be wiped and worshipped. So, as I rode the supercrowded Express to Kudroli, I made up my mind to gain some knowledge about Navarathri.

The lane leading upto the temple was thronged, with the usual peddlers and beggars(Damn, I miss those summer vacation temple fairs at my village). The arrangements seemed nice and the lights looked stunning and the twilight was still receding slowly. We were bathed in blissful yellow light in the temple complex. Each of the temples dedicated to different Gods were beautifully decorated. The main attraction was the NavaDurga idols about which I will mention a little later. The Darshana was good and it was calm experience, the large crowd notwithstanding.
All in all, it just felt good to be there.
I suggest people close to Mangalore to take just a couple of hours and be part of the celebrations. You can alight at the Lady Hill stop and take another bus going to Kudroli. It will definitely be worth the effort.

So, as I knew very little about the significance of the festival, I thought I will do some research and it turned out to be a enlightening to say the least. In any case, I will just mention here, the Navadurga, Her Dhyaan Mantra and the English translation. I was fortunate to be able to capture some pics of the idols kept at the temple and I was happy that I learnt something about each of the idols.I have posted below, the Navadurga, along with the pictures of the idols at the temple. 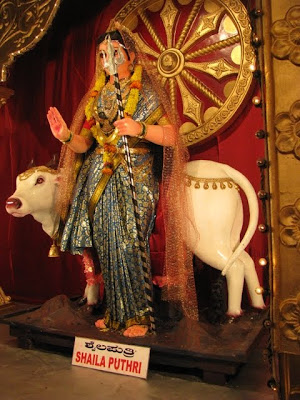 May the illustrious Shailaputri Durga whom I salute and whose head is adorned by a halfmoon, who rides nandi a bull and carries a spear fulfill the desires of my heart,. 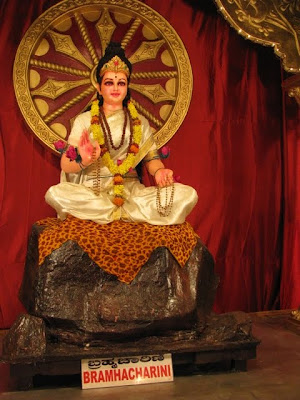 May the supreme Brahmachari Durga, who holds rosary and kamandalu in her lotus hands and whose nature is to attain Sachchidanandamaya Brahmaswarupa the Existence-Knowledge-Bliss absolute, be propitious on me. 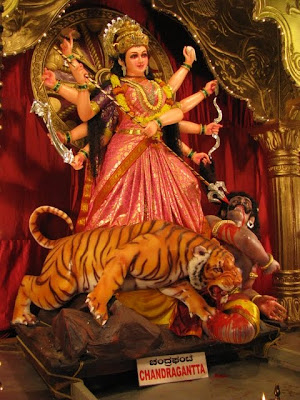 May that Durga Devi, who rides on Garuda, the king of the birds, who is endowed with intense anger and violence and is renowned by the name of Chandaghanta, bestow her grace on me. 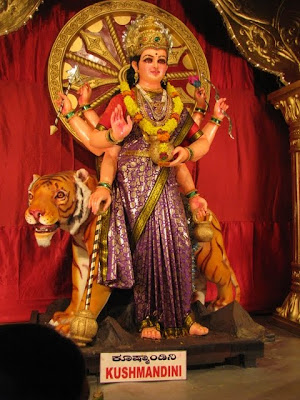 May Kushmanda Durga who holds two pitchers full of blood in her lotus hands and the universe is created, sustained and drawn within herself in a wink be propitious for me. 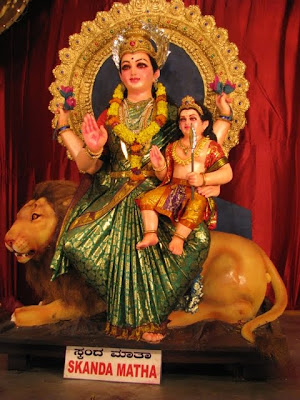 May the renowned Durga Devi Skandamata who is eternally seated on a throne and whose hands are adorned with lotuses, be ever propitious to me. 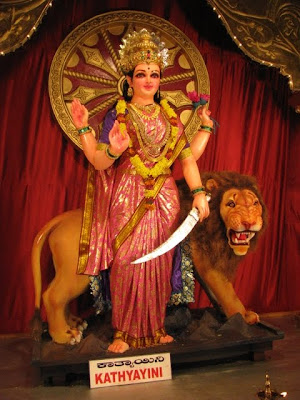 May the ever watchful Durga Devi Katyayani, who holds shining Chandrahasa (Sword) in her hand and rides a magnificent lion and destroys the demons, bestow welfare on me. 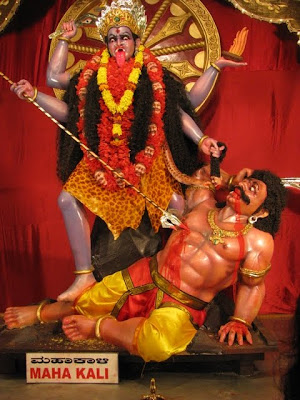 May she Bhayankari Durga who is naked with long lips, riding an ass, shining in various hues looks formidable because of the halo of her lustre and is adorned with multi coloured ornaments remove my darkness of ignorance. 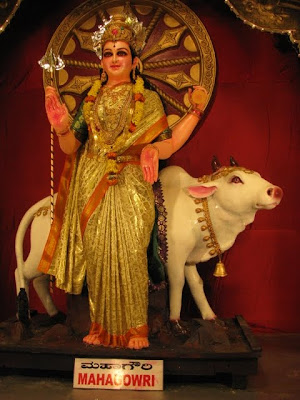 May the Mahagauri Durga who rides a white rishabha bull and who wears spotless white clothes and remains ever pure and also provides ever lasting bliss to Mahadeva Shiva bestow all auspiciousness. 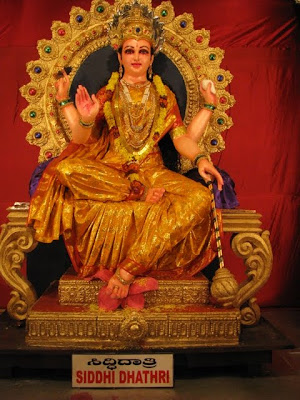 May the ever victorious Siddhidayini Durga, who is always worshipped by the hordes of siddha, gandharva, yaksha, asura, and deva, bestow success at my every venture.


Although we tend to shoot down certain ideas as plain mythology of the gone ages and that they have no meaning to this day, let us also realise that the principles that each of the stories that we term so naively as childish fiction are actually all the more relevant today.
Great Thought evolves in trying to search for the Creator - be it in the search of Truth on the Chariot at Kurukshetra or in the Large Hadron Collider at CERN.
Great Art evolves in trying to reach for this Creator - be it in the Classical danceforms or in the strumming of an electric guitar.
Let us celebrate in our own way, the victory of good over evil this Dasara and make these golden ideas a part of our life.