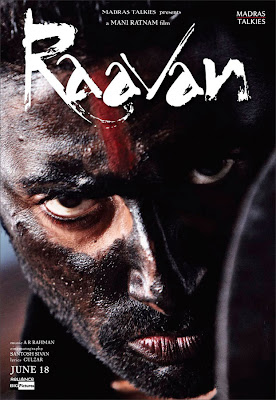 There was once a just king by the name Rama and there was an evil king by the name Ravana. Rama kills Ravana and saves Sita. Now thats the Ramayana for you and me. Well, the genius of Mani Ratnam meets a rather subdued perspective of the Ramayana in an epic called Ravan. A perspective that echoes the same sentiment as the temple dedicated to Ravana in one of the many unusual temples that adorn this country. A perspective where Soorapanaka was considered a beauty that was unparalleled by anyone. A perspective that recognises the various Grays of Good and Bad - just like the artistic appeal of the can of white that mixes with the sea of Black in the opening credits for this 5 starrer entertainer.

Set in the backdrop of stunning tribal locales, the opening scenes seem to reflect the chilling horrors of the recent Naxal massacre of the Men in Khakhi. Beera (Abhishek Bachchan) plays the eccentric dark protag, who dares to kidnap the belowed dancer wife of Dev(Vikram) - Raagini (Aishwarya Rai). The reason for this target becomes clear as the plot unfolds amidst thick jungles, heavenly downpour and of course cheesily crafted couplets from none other than Govinda! And as the fog lifts from this rather thick plot, the Ram in the Raavan and vice versa is seen. What is probably the most impressive thing about the movie is the way the plot reflects, in no real blatant manner, the actual Ramayana. Be it in referring to prominent motifs from the actual Epic to tailoring the characters to play the modern part, the handiwork of a Genius is seen.

The cinematography uses plenty of techniques to lend a unique feel to every scene - be it the crashing of the boats during the kidnap or the roundabout sway of the camera that keeps Beera in sharp focus. The Mozart of Madras leaves no stone unturned in composing yet another masterpiece. The background score during the climax in divine conjunction with the dialogues made for some of the finest finishes I have ever seen - Hollywood or Bollywood.

I might have missed a great deal in this brief review of a Masterpiece, which I hope to cover soon again. It's a must watch and so is RocknRolla btw :)