June 11, 2010
Bibek Sabharwal was tried in Finland and as the ever merciful courts of that country pronounced a death sentence, more than one prayer was answered.
As the judges and jury and the grand army of conscience keepers listened to the chilling tales of pure terror, atheists believed in Devil.

After gouging out the eyes of the young women, he delivered a psychotic account of the problem statement. And the statement was not merely a concoction of constraints and freedoms in a fixed set of physical dimensions. The statement as they said, would help crossing ancient barriers of understanding across a wide range of research areas. The solution lay not in the objective abstracts of Maths, Geometry and Space, but in an inward journey.
He then tortured out an account of the inner landscapes the prostitute and the actress saw. It isn't sure how coherent or even truthful they were, but the Devil would have surely known the tricks. And as these vivid descriptions had spewed forth, he had seen a solution. The solution could not be represented as an n-dimensional matrix or as a formula or a word. It lay in a deep understanding of art and music. Severe contemplation in the midst of delirious brush strokes and cantabile notes held the key. The Mysore Mallige played host, as Bibek Sabharwal went on to recreate that audio-visual Einstein. The visions of Riika had provided the final piece of the jigsaw puzzle.

Even as the sentence was read out to him, not the tiniest bit of remorse were seen in his eyes. They sparkled on. It then hit me. Standing atop four hillocks in south-west coastal Karnataka in Southern India were grand monoliths, erected half a millenium earlier. The Devil's eyes chillingly mimicked theirs. The eyes of a person reflects not what the owner inherently knows but what you, as Grand Jury know about the owner's noesis. To just know that for centuries a pair of eyes lay fixated at infinity - seeing the world go by, it's greatest triumphs and it's saddest tragedies. Seeing massive and yet infintesimal technological and intellectual breakthroughs. Aah! The Bliss! What Bibek Sabharwal reflected in his eyes, I would never know had it not been for my personal investigation. Even my supposed Sixth Sense would never have hinted it. Yet, as the story unfolded, the sinistrality of that stare rose to a chilling climax - one of having known All. And as I put away today's copy of the Helsingin Sanomat, I feel like I had glimpsed - just a momentary bloodcurling glimpse of the Agna - The Third Eye. 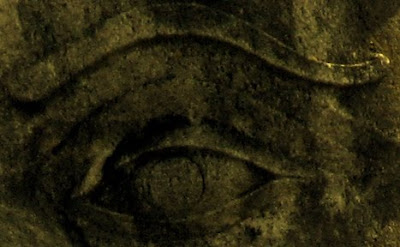