Meetings along the Edge 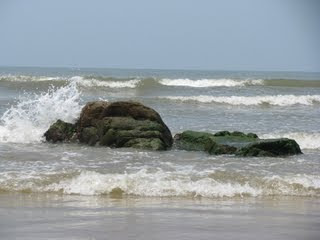 Leaving the world behind,
Rediscovering the self,
Attempting to make complete sense out of something at the least,
Justifying held ideals and discovering new ones,
Remaking the boundary between triviality and profundity....

Our recent trip to Gokarna was an unintended quest for some form of clarity.

Four hours along the Konkan rail,
Rickety ride to Kudle,
Delightfully secluded and truly multinational shack,
an all the more satisfying sizzler,
Warm soft sands, the cool and clear sea, the blazing hot sun and the chilling drizzle - and that delectable interplay among them all.
Eeriness of dead fish at the sea,
Raw force of the almost divine waves,
Little trek up a hillock,
One of nature's endlessly beautiful endless panoramas,
Adverted to the insignificance of all that was important,
Frantic descent in the fast-receding twilight,
Silent tea by the shack,
Well deserved Russian Salad,
The bizarre "Gokarna Lights",
Deep slumber as crashing waves lullaby,
Pancakes as in Pancakes for breakfast,
Effortless trek to ॐ,
Sober introspection by the rocks, amidst incessantly crashing waves,
The King - both the fish and the fisher,
Rickety jesht-adjesht on rick to station,
Four hours down the Konkan,
and.... we're back!


Everything's so quiet and peaceful and as I hurriedly write this memoir, I anticipate this high I ride to recede soon and things to get more obscure and muddled as days go by.
Here's hoping it doesn't or at least not before the Cow's Ear is revisited.

PS - "Meetings along the Edge" is a brilliant instrumental by Pandit Ravi Shankar and Philip Glass. 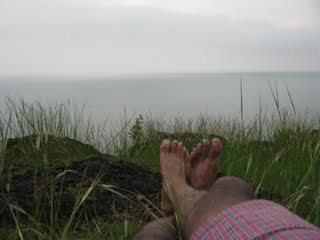 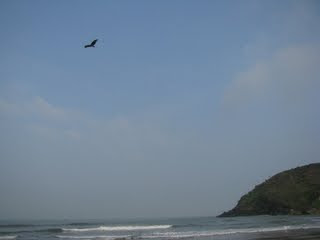 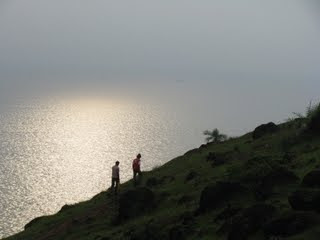 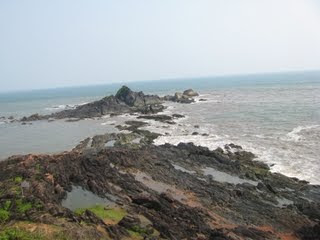